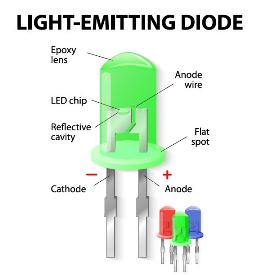 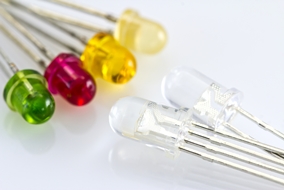 All lamps have a specific “bulb type” designation that describes the shape of the lamp and the size of the lamp (diameter). The designation is a two part code consisting of a letter and a number. The letter indicates the shape of the lamp and the number relates to the diameter of the lamp in eighths of an inch. A “T” designation means “Tubular”, which in the form of a T-1 ¾ lamp became the primary package size for LEDs when they were first introduced and are still a standard form in much demand. . “T-1” is the base designation for a 1/8” diameter lamp, the smallest size “T” lamp. Other designations are based on the T-1 standard, i.e., T-1¾ is 1¾ multiplied by 1/8, or .219”. These were then converted to millimeter, so a T-1¾ is also known as a 5mm lamp. MARUBENI-OPTO™ sells 3, 4 and 5mm LED PTH Lamps. Once this occurred the diameter of the lamps more closely approximated the mm dimension. Other T-size lamps up to t-10 can be made as custom devices. Please contact us accordingly.

This is a 4-pin PTH LED Lamp first introduced by HP and nicknamed “Piranha”. It offered more lead-frame mass, so could enjoy a higher drive current. Its’ parabolic concentrator was also a new non-imaging optic (NIO) feature as compared to T-Series lamp styles. With or without lens styles were brought to market. This type of PTH lamp became quite popular in automotive lighting functions in particular.