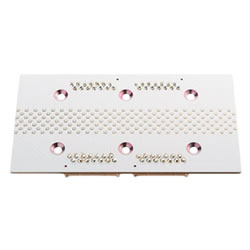 Also known as Chip-On-Board or COB, which is an incorrect nomenclature as the term “chip” is used for SMDs. Also known more correctly as Die-on-Board or DoB, wherein a PCB, usually a metal-core PCB receives bare die in the packaging process. I/Os are via soldered or mechanically attached wires or screws. The “board” can include as many as 100 die or more. Small format die which are particularly electrically efficient as compared to large 1000 micron die, are utilized in series/parallel formats, commonly with phosphor over-coating held in place via an attached ring-frame. This type of device comes in linear or square formats and is commonly utilized in lighting. 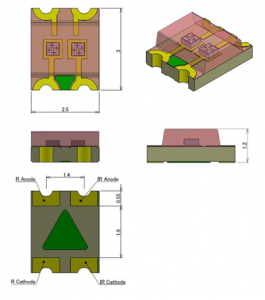